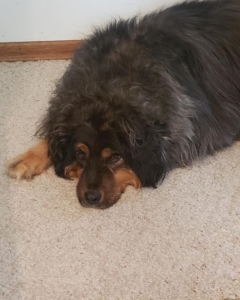 Tynder has been at SCARS for 7 years. Although comfortable with those she knows and comfortable with the animals in the home, she is quiet and fearful of most things. Her response to anything new or different or loud is to run and hide. She rarely makes a sound, reserving a few happy little woofs for mealtimes as the food arrives in her dish. She is comfortable in her familiar surroundings and enjoys her quiet life.
Last month (June 2021) on a Saturday night, at 2 in the morning her household was awoken by ferocious growling and barking. The sound of a seemingly aggressive and angry dog. Tynder who always sleeps by the bed was not in her usual place. She was in the living room and on high alert. Alarmed and furious would be the best words to describe her. A quick survey out the window told the full story. An intruder was attempting to break into the house. Tynder was the only one who had heard the stealthy approach and the nefarious activity. Somehow she conquered her own fears and sounded the alarm as she took action to protect her sanctuary home and her family of humans and dog friends. By this time the other dogs were well aware of the threat and were now at the ready to defend the home.
Once her people and the pack were aware of the threat, Tynder dropped back into her usual personality, quietly observing and watching the goings on from a safe spot on the couch. The intruder continued to circle the yard, with the speedy arrival of the local RCMP, the evenings adventures ultimately ended safely and peacefully.
Tynder is not the one anybody would expect to lead the charge, as it were, but somehow she knew in the moment it was up to her. While everyone else slept she was needed to defend the house and the family. Her moment had arrived to find her courage! Find it she did. Her early years as a feral dog maybe makes her more alert and aware and she heard the quiet noises of the would be intruder. A bit of an unlikely hero, but a hero all the same. Extra special treats have definitely been on the menu!
Our thanks to her Sanctuary sponsor, which allows SCARS to continue to support a dog like Tynder and give her the opportunity to live her best life.