August 23/21 – When Oozy came into care, he was a tiny 4-week-old pup that came in from a rural vet as a surrender, not because someone did not care about him… but because his condition was critical & expensive. His mother was rescued by kind people & had been hit while pregnant. We do not know if his condition has anything to do with that. Little Oozy was having problems breathing. It was originally thought he may have a diaphragmatic hernia. He was taken to Guardian veterinary to see a specialist for what we thought would be life saving surgery… BUT turns out this is not what the problem is. After 24 hours in care, we still didn’t know what was wrong, but Oozy required oxygen. There were several possibilities and further diagnostic testing was needed. 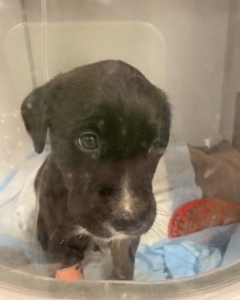 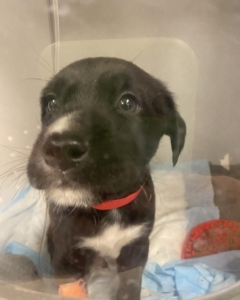 August 27 update… Hi! Oozy here! I have settled into my foster home after the trip at the vet. Turns out I had been fighting pneumonia. Everyone at Guardian took really good care of me. I’ve got more energy now and love to run in between my foster mom’s feet. However, I still struggle with my breathing and it can sometimes cause me some vomiting. My foster parents feed me very small meals to prevent this from happening. But it happens from time to time. Even though I’ve been mostly isolated from my foster brothers to keep my energy levels low I cannot wait to play with them! 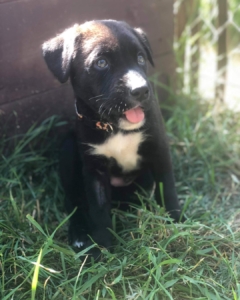